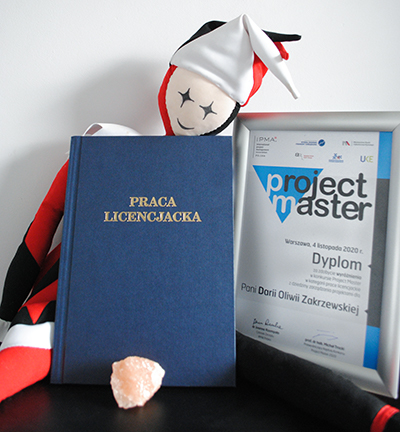 Daria Zakrzewska, University of Gdańsk Theater Studies graduate and Management student, created ‘Figuratywni’ (figurative people) theater festival as a part of her BA Thesis. The main objective of the festival was to offer an insight into theater as a collaborative art form. Her project received recognition at the national competition, Project Master, for the best BA, MA , doctoral and post-graduate theses in the field of project management.

The BA Thesis was delivered at the Division of Drama, Theatre and Performance under supervision of dr hab. Elżbieta Mikiciuk, prof. UG, whereas the project was brought to life within the scope of Independent Association of University of Gdańsk Students operations.

- In my BA Thesis, I focuses on describing theatrical project creation from practical and artistic points of view. I am a member of only the second class at the University of Gdańsk, that can receive their diploma by creating a cultural event - Daria Zakrzewska wrote in the summary of her thesis. – Initially, under the project events educating people on the broad subject of theater were supposed to be held, together with the theater festival lasting for three days. I wanted to show that theater does not only mean outstanding directors, actors or plays but also form of having fun and therapy. The intention of the project was to organize a festival, involving two-day workshops, integration and theatrical review.

And she made it. The 1st edition of ‘Figuratywni’ festival took place on 5-7 April 2019 and over 50 university and high school students participated. The originator of ‘Figuratywni’ project also co-creates Ster na Kulturę (Steer for Culture) Project.

Project Master is the national competition organized since 2002 by IPMA Poland and Faculty of Economics, Finances and Management of the University of Szczecin. The competition intends to promote the idea of project management and selecting and awarding people with extensive knowledge in this field. It is divided into four subcategories: BA theses, MA theses, doctoral theses and postgraduate theses. More about the competition.